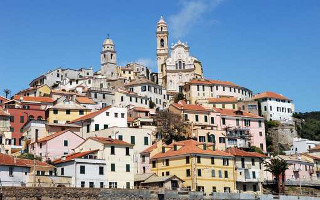 “…Cervo, from years certified as “one of the most beautiful villages of Italy” has preserved intact its original characteristics of medieval seaside village, protected from walls and towers of the 16th century and surrounded by green hills. The historic center is a big pedestrian area and it has been preserved with its centuries old buildings and its narrow alleys paved with cobblestones, where one can visit arts & crafts workshops.

The coast is characterized by the presence of small beach resorts; aside from those the visitor can find discrete and peaceful foreshores and reefs where only the voice of the sea can be heard. Water is always clear, with depths full of fish and seaweed.

Heading north, around ruins of ancient times, hills are covered with pines and olive trees and can be hiked through silent paths, breathing clean air…”

Presentation taken from the official website of Comune di Cervo. 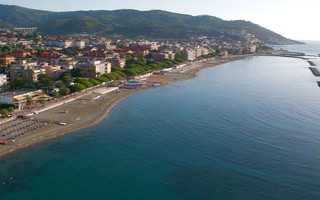 “…San Bartolomeo al Mare is located in the province of Imperia, approximately 9km away. It is a seaside town located in the “Riviera Ligure di Ponente”, characterized by that temperate and stable climate which continuously makes the “Riviera dei Fiori” the ideal destination for healthy and relaxing holidays.

The seaside small towns in the Diana’s countryside are seven: Diano Marina, whose name recalls the ancient cult to the goddess Diana, is the most important center and it names the district with its villages. The next valley of the Golfo di Diana, close to Steria’s brook, is formed by San Bartolomeo al Mare, together with Cervo, which hosts the International Chamber Music and Villa Faraldi, located in the closest countryside, famous for the Theatre Festival that animates the village during the Summer.

Among the villages in the countryside, Diano Castello, today well known for its Vermentino’s vineyards, was the ancient administrative center with its Castrum. Finally Diano Arentino and Diano San Pietro, together with their smaller villages, oversee since ancient times the valley of Evigno’s brook and are its olive growing’s heart…” 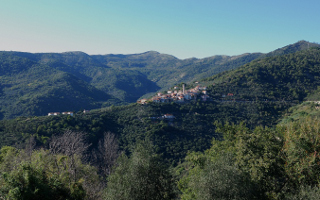 “… Villa Faraldi is a small village that has the dream or the presumption of becoming a Village of Arts. The Faraldis, people of tradition but also with innovative spirit, are driven by the aim to develop. They understood the healthy cultural influence coming from national as well as European areas.

A warm welcome, ability to adapt and spirit generated a thirty years long’s cultural gratification giving to the village, tourists and to whom is willing to disclose them front-rank events and a great promotion of the territory.

Art’s Festivals, music and theatre, exhibitions, installations, internationally known artists, books, local talents and intercultural twinning with various Countries such as Norway, Denmark, Switzerland, Germany left a huge heritage. Now the last challenge is on: to promote a new cultural administration to be a propelling engine of the urban, local and quality of life’s requalification…”