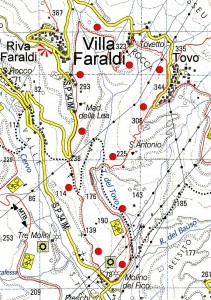 Terracing the slopes was a tremendous effort for farmers who, starting from the top of the hill, would take away portions of terrain in order to bring it downhill and create a horizontal flat platform, the “fascia”, which they would sustain with a small dry wall of stones (built without employing any bond). This effort was necessary to make the elevations, often steep and precipitous, fit for cultivation.

Cereals, figs and grapes were originally cultivated on the “fasce”. Since the XV century however, the main protagonist has been the olive tree.

Following this itinerary one observes how even today, though in less extent than the previous centuries, local inhabitants cultivate olive trees, which dominate the other cultivations.

Only in the areas where cultivations have been abandoned, the typical evergreen bushes of the Mediterranean Scrub (such as genisteae, cysts, pistacia lentiscus, italian buck thorn, myrtle, juniper, arbutus, “strappabraghe”) slowly reconquer the land that was stolen from them. These bushes “prepare” the land for a future return of evergreen oak forests.

Tovo Faraldi stretches along the crest in a position that offers a splendid view all over the Valley.

Many foreigners elected Tovo as their home and renovated the houses with extreme care.

From the church’s square one reaches the churchyard and following the ancient mule track which heads downhill to the Tovo’s brook. Crossing the brook the track continues to Molino del Fico.

On the way one crosses some abandoned buildings: the chapel of S.Antonio and other ruins on the valley floor.

Crossing the brook it is possible to follow the valley floor towards Molino del Fico. After a brief part on the county road, one walks again uphill through the main part of the crest called “Crostone”, which heads down from Villa to Molino del Fico.

During this part of the itinerary one runs into several chapels and votive pillars. The historic mule track paths are studded with these religious constructions, originally built to protect the places or simply to keep a memory of particular events. Mule tracks were once the only way to travel and to connect the local villages. Today they represent the human’s appropriation of the territory.

Once arrived to Villa Faraldi, it is possible to notice that it is a village with compact urban structure and narrow alleys that intersects with each other. Here it is possible to admire the church of San Lorenzo, which has a richly plastered façade. In July the church yard hosts the theatre plays from the Festival.

Leaving behind the City Hall, heading towards Tovo, one walks downhill on the right along the mule track that leads to the chapel in locality “Il Santo”. From here one proceeds on the left along a road which crosses horizontally the slopes through olive trees.

After crossing two brooks, beside the next slope, one leaves the road and walks uphill to Tovetto, following an ancient mule track. The deep pavement of this track allows a comfortable walk and keeps the way free from the invasion of genisteae and other bushes from the Mediterranean Scrub.

Right after a votive pillar one reaches a small village. From here, it is possible to proceed along the “carruggio” (typical local alley) that runs next to the church side. Some parts of this alley are nowadays cancelled, but it is still remember by the local inhabitants as the “vecchia comunale” (old county road) to Tovo.

“Popping out” from this alley one reaches the church square of Tovo.