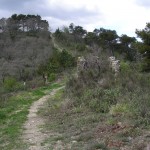 From piazza S. Antonio one must walk up the Dr. Ardoino street until n.48. Shortly ahead, on a curve on the right, starts an ancient mule track which leads to the crest; following it, close to some ruins, one crosses the path marked by red squares, which goes downhill from the top of Monte Torre (999 MASL) to the seaside.

The first part of the path runs along the signs of the gas pipeline, and heads to a little oak forest. From here the view already opens to Val Merula on the left and the sea on the right.

The path is continuously up-and-down: the highest point is Monte Chiappa (541 MASL). 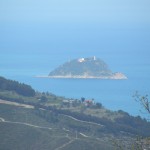 As one proceeds towards Colle Cervo the horizon opens: on the right it is possible to see the villages of Val Steria, Chiappa and Villa Faraldi. In the distance the mountain tops Monte Torre (999 MASL) and Monte Faudo (1100 MASL). Towards the sea one can admire the Dianese Gulf, on the left the town of Andora, the Gallinara isle and the cape of Caprazoppa. When the sky is clear it is possible to distinguish the city of Genoa and the Corsica’s coast.

As the path proceeds, right before reaching Colle di Cervo (recognizable by the presence of antennas) an unmade path starts in proximity of a fenced tank. This path allows one to reach the village of Chiappa. Once in the village, it is possible to take the paved read and head back to Tovo. 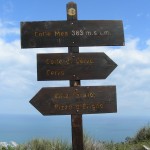 Instead in order to reach Cervo, one must continue until he reaches an unmade road which leads to the antennas.

A couple of meters before the repeaters’s fence, it is possible to find a path (red squares). The path circumvents the hill, going down until it reaches an unmade road that after a short way uphill, starts to come down and becomes very rugged. One must follow the road for three turns and after the last one, (a. 100 mt.) one will find a path on the right. This path goes shortly downhill and then proceeds straight on the side of the coast, giving views of Cervo and the Gulf.

Leaving a crossroad on the right, one reaches a panoramic terrace right over the sea and one walks down to an unmade road that leads to the higher part of the Parco Comunale del Ciapà. After the park sign, ignoring all crossroads, one has to follow the road reaching the Castle of Cervo. 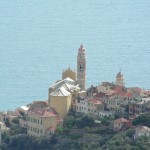 From here it is possible to reach the sea, following the alleys of the ancient village.